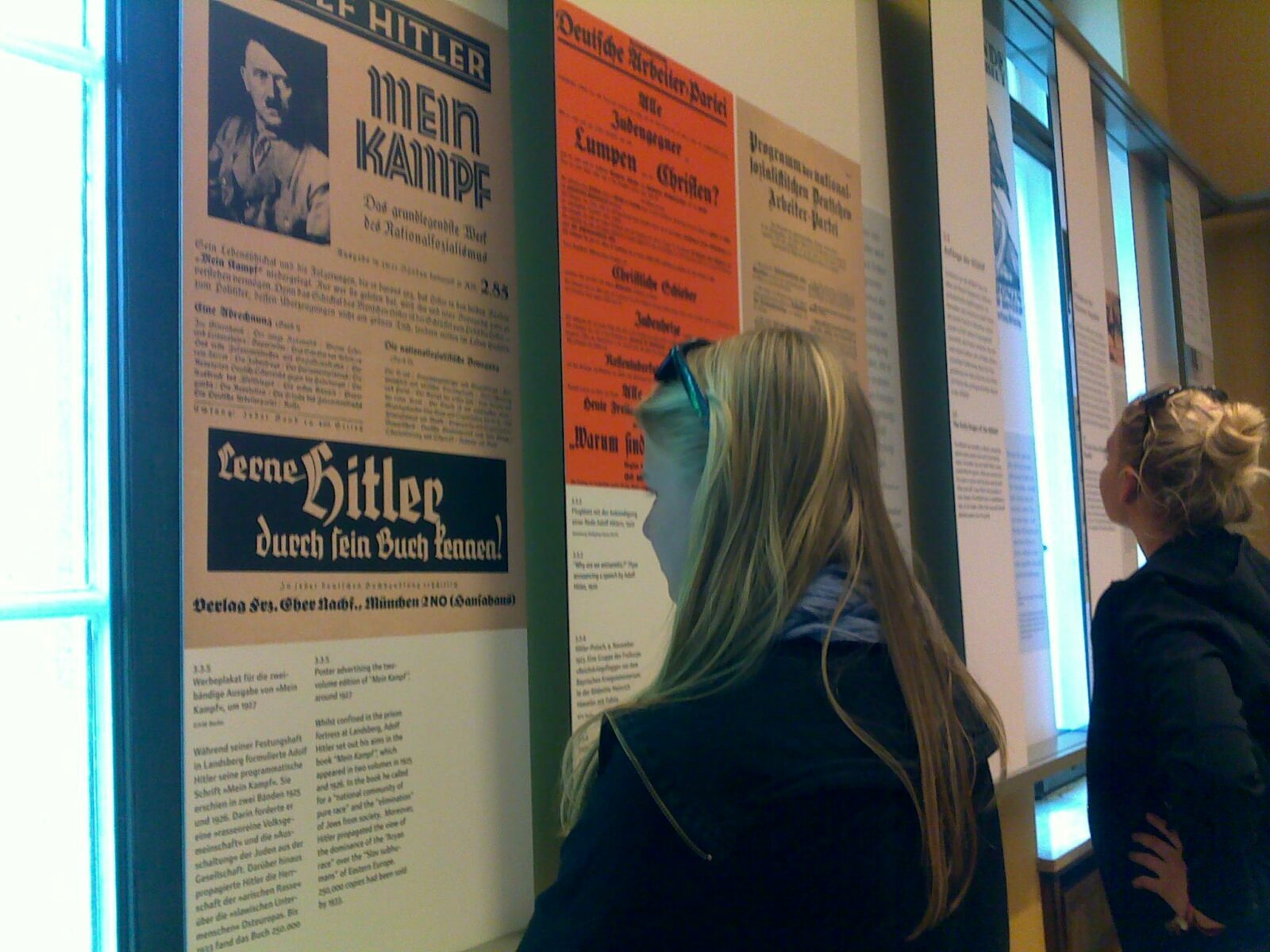 Students from the St. Ursula-Schule, a Catholic high school in Germany, view facsimiles of ads for Hitler’s “Mein Kampf” at the House of the Wannsee Conference in Potsdam, site of the planning of the Final Solution. (Toby Axelrod)

With Adolf Hitler’s book due to come out of wraps here in 2015, freed after decades under copyright protection that prevented its publication in Germany, it’s a question that is being debated in classrooms and on German TV talk shows.

The discussion has not eased since the Ministry of Finance in Bavaria, which owns the rights, announced plans earlier this year to prepare annotated excerpts for German schools. Scholars at Munich’s Institute for Contemporary History are working on the official annotated edition of the approximately 900-page book.

Critics say it’s better not to play with fire: Some youth already have an unhealthy fascination with this chapter of history and don’t need further fuel. But most observers agree that excerpts with expert commentary could help demystify the taboo tome.

Germany’s Jewish community has no problem with plans for the new edition.

Stephan Kramer, general secretary of the Central Council of Jews in Germany, has said it makes sense to publish the book “to prevent neo-Nazis from profiting from it” and to “remove many of its false, persistent myths.”

The move “is absolutely right and overdue,” said Julian Barlen, co-founder of the anti-Nazi website Endstation Rechts and a Social Democratic legislator in the former East German state of Mecklenburg-Western Pomerania. Anyone who wants to read the book can download a copy anyway, he noted, and its ban “probably even raises the fascination with Hitler among some teens.”

Actually, it’s “a very boring book and no kid will like to read it,” suggested political scientist Thomas Lutz, who heads the memorial museums department of the Topography of Terror Foundation at the site of the former Gestapo headquarters in Berlin. “A special edition may be helpful as a further possibility to deal with the Nazi period, but I would not overestimate its impact.”

Hitler wrote his rant against Jews and communists while in prison in 1923 following his attempted coup in Munich. After he came to power in 1933, many editions were published, including one given free to newlywed couples and one to mark Hitler’s 50th birthday in 1939.

“The Nazis tried to put the book everywhere,” said historian Christian Hartmann of the Institute for Contemporary History, which is advising the state’s Agency for Civic Education on the educational excerpts.

Following World War II, the Bavarian Finance Ministry inherited the copyright from the publisher, and until now has barred publication in Germany in an effort to limit the spread of Hitler’s ideology. But that does not stop publication elsewhere.

“Of course, Hitler is a fascinosum,” an object of fascination, Hartmann said. “Evil is always fascinating, and you can’t prevent that.”

Accordingly, the book “is one of the most purchased in the world; more than 12 million copies have been sold. Here, where it was banned, people have read it secretly.”

Hartmann added that “What we are trying to do is demystify ‘Mein Kampf’ and to make it what it is: an historical source and nothing more.”

Amid Hitler’s inaccurate accounts of personal and world history are hints of what would come, he said. “Such things as the Holocaust, the attack on the Soviet Union, relations with France and Italy, attempts to form a union with Great Britain — these are in the book. It is a kind of master plan for his later deeds.”

Documentary evidence of those deeds can be seen at the House of the Wannsee Conference in Potsdam, just outside Berlin. On a glass-topped display table in a ground-floor room are facsimiles of the minutes of the Jan. 20, 1942 meeting where the “Final Solution” was mapped out. Adolf Eichmann wrote the protocol.

Students from the St. Ursula High School of Geisenheim, their faces reflected in the glass table, viewed the pages intently, taking cellphone shots of them: “In the course of the practical implementation of the final solution, Europe will be combed through from West to East … Any first-degree Mischling [with one Jewish parent] to be exempted from evacuation will be sterilized in order to prevent any progeny … State Secretary Dr. Buhler …had only one favor to ask: that the Jewish question in this territory be resolved as fast as possible.”

People “could have known” what was coming if they read “Mein Kampf,” said teacher Annette Zschatzsch, looking at the display with her students. “But people did not read it.”

“We talked about it in class,” said Nora, 16. “My grandfather told me he got a copy from his bank, signed by Adolf Hitler. He put it away; he found it too extreme. And then he lent it to a friend who never gave it back. He told me he wished he could have shown it to me.”

As for whether it would be useful for students to read the book, “to put it bluntly, no one really needed it up to now,” said her classmate, Eva, 17. “It could be interesting … but I think it is not needed for youth.”

David, 17, said he thought it would be good for students aged 16 and older to have access to explanations and a “watered-down version.”

Zschatzsch, who graduated high school in 1984, noted that she and her classmates also were able to read parts of “Mein Kampf” excerpted in textbooks, “but the degree to which it was used depended on the individual teacher.”

Classrooms are not the only venue for learning about “Mein Kampf.” German cabaret artist Serdar Somuncu boasts that he’s “the only one allowed to read from the text on stage.”

The Turkish-born performer recently told ARD TV talk show host Anne Will that he had read excerpts to 250,000 people, including 1,428 German high school students. “It’s better to understand [the book] than to suppress it,” he said. It helps one understand “Mein Kampf” “leads directly to this ideology — this fatal, inflammatory ideology.”

In a typical routine, shown on the ARD segment, Somuncu recites on racist theory from Hitler’s text. “Every animal mates only with his kind.” The audience laughs nervously. “The titmouse … seeks out the titmouse.”

“But you will never find a fox” – “those damned foxes,” Somuncu adds – “whose inner character would allow … somewhat … humane impulses … towards geese.” More laughter.

Later he said, “Laughter is important as a way to open people, to gain entry, verbal access, especially for young people,” said Somuncu, whose intention is to prompt reflection.

There is no laughter at the House of the Wannsee Conference. Students wander in silence through the rooms where high-ranking Nazis discussed the logistics of genocide. On one wall hangs a 1927 ad in facsimile: “Get to know Hitler by reading his book,” it suggests.

It won’t be long before Germans of all ages have the chance to do so — but this time with the knowledge gained in hindsight.